1. Americans will celebrate Labor Day this coming weekend. Do you know what we're actually celebrating? (without consulting your friends Google or wikipedia, ahem) What's a project you're currently 'laboring' over?

Isn't it the unofficial end of summer? LOL. A project that I should be laboring over is getting my curriculum together for our homeschool. Instead I am enjoying the rest of summer and beginning to think about it ;)


2. Labor Day also signals the unofficial end of summer for most of us...what summer food will you miss the most? If you're in the southern hemisphere feel free to substitute winter for summer.

Fresh corn on the cob from the farmstand. I am going to have to get some this week since it won't be available too much longer.


3. A well known proverb states, 'It's easier to seek forgiveness than ask permission.' Your thoughts?

Asking forgiveness isn't always easy but it is something we must do regularly. I don't think seeking forgiveness is easier than asking permission if you knew the right thing to do was to ask permission, then it is harder to do what you knew was wrong. Does that make sense?


4. Food critic, film critic, book critic, art critic....which hat would you most like to wear?

Food critic. Except that would mean I would have to eat lots of different foods, even the ones I don't like.


5. When you were a kid, who (besides your parents) was your favorite adult?


My first grade teacher, Mrs. Baker. When I was in her class we had a new student. Mrs. Baker asked me to be her special friend and show her around. I did and the new student became one of my best friends and still is over thirty years later. Besides introducing me to one of my best friends ever, she was a wonderful teacher who I looked up to. Years later the class I was student teaching in was pen pals with her class! How fun it was to hand deliver our letters and get to see her again.

6. The astronaut, Neil Armstrong, passed away last week. He was regarded as a hero by many generations of people all around the world. Do we still have modern day heroes? What makes someone a hero?

Yes. Heros are all around us everyday. They are the ones who are sacrificing their lives for others- our military, firefighters, police officers, the good citizen, etc.


8. Insert your own random thought here.

I'll play along. Here are the fifteen vocalists I came up with:

How is that for variety? 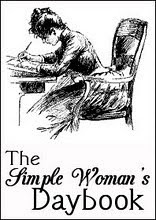 FOR TODAY
Outside my window... the crickets are chirping. It is dark out and today was sunny and warm.

I am thinking... I am hoping to keep with my exercise schedule. It is so hard for me to stick with it for some reason.

I am thankful for... food, shelter, clothing, family and friends. The many blessings we have each day.

From the learning rooms... we are on summer vacation.

From the kitchen... BBQ ribs and broccoli. Unfortunately the BBQ sauce on the ribs flared up and the ribs were a bit more done than I'd like ;)

I am wearing... khaki shorts and a magenta top with a white pattern.

I am reading... the Bible, "Lies Women Believe".

One of my favorite things: laughing with my children :)

Click here to visit Peggy and The Simple Women's Daybook

1. In an effort to combat obesity, the mayor of NYC has plans to ban the sale of large sugary drinks (anything over 16 oz.), initially in restaurants, movie theatres, and street carts. Corner stores would also be affected if they are defined as food service establishments. You can read more here . Your thoughts?

Ridiculous! Since when does the government have to right to invade our personal liberties?! Well from the looks of things it looks like people have forgotten how this country was founded and what our forefathers fought for. If someone wants to drink five gallons of soda it is not for the government to decide. People need to be responsible for their actions and not look to blame society. If you are obese from drinking too much soda it is not because you were able to be a larger than 16 ounce drink in a public place! If you haven't heard Mayor Bloomberg also is introducing a program called "Latch On NYC". I am sure he means well by trying to promote breastfeeding but here again government involvement is not the answer. BTW I consider myself a breastfeeding advocate and would encourage any mother to breastfeed, however it is not for the government to tell mothers how to feed their babies. As a New Yorker, I am glad I do not live in NYC at times like this!


2. Art festival, music festival, food festival...which would you most like to attend?

3. What are you irrational about?

Germs. I am a germ nut and can't help but to think about how dirty things are. If you think I am overreacting go into a public restroom and watch for a while. I really am not that crazy for using a paper towel to turn off the water and open the door. Yuck!


4. Do you feel confident you'll have a comfortable retirement?

Umm, I don't think about retirement. Some may say that is unwise but really I am trusting God to provide for our needs, and if that means working past retirement age then so it is.

5. What's been your favorite Olympic moment so far?
(Not ever, just in the 2012 Summer games)

I have watched only a little bit of the Summer Olympics. I was watching the women on the parallel bars the other night and let's just say I don't think it is good for my adrenal glands- LOL! My heart stopped as they flew through the air. I don't know how their mothers can watch.


6. What would you label as the messiest room in your house?

The basement. We use it for storage as well as our laundry room and my husband's office area. It is so easy to just put stuff down there and close the door. I am sure if I had to walk through it every day it wouldn't be so messy.

I would have to say my head. My heart has deceived me before so I like to think I have learned.

“The heart is deceitful above all things, And desperately wicked; Who can know it?" Jeremiah 17:9

8. Insert your own random thought here.

One of my dear blogging friends, Cathy aka Fullhousemama, went to be with the LORD on July 22nd. Her oldest son James wrote a beautiful post letting us all know that her battle with cancer is over and she is now with our LORD. You can read it here. There will be a Memorial Service in California on August 11th, please remember this precious family in your prayers. "Blessed Be Your Name" was one of the songs on Cathy's playlist and I will always think of her when I hear it. "Blessed Be The Name of The LORD".

Learning how to sew better. I have a tote bag that I started for my daughter a few years ago and would like to finish it. Also a quilt that is pinned together and needs to be quilted from over ten years ago. I had someone helping me to work on those so it wasn't too hard. I took out the tote today and cut a few pieces and then put it away.

Eight that I can think of. We only have one TV though. Three are for air conditioners, one is for the radio, one for the VCR/DVD, and two for the Wii.
I wish I had a remote control for the dryer. I usually forget that I have clothes in there and they get wrinkled. Then I have to go downstairs and put it on wrinkle release. If I had a remote I could do it from upstairs ;)

3. What does having it all mean to you? Is it attainable?

Having it all to me means following your heart and doing what you love. I am doing that now so yes it is attainable. For me it is being able to teach my children at home and share the moments of life together. I know some will disagree but I don't think having it all involves finances.

The Wedding Singer, hands down. Nothing like the 80s for music!

5. Describe the best view you've seen from a rooftop.

I can't think of a time I've been on a rooftop except for when we used to climb out my sister's bedroom window and lay on the roof to tan. All I could see was the street and some of the neighbor's backyards so nothing special about that. Crazy, I know!


7. Our weekly Hodgepodge falls on the first day of August. In ten words or less sum up your July.

Big birthday for me; lots of sweet memories being made.


8. Insert your own random thought here.

Can anyone recommend a good book, blog or video to learn how to sew or quilt?

Theresa
I am a Christian wife and homeschooling mom being refined as silver. I am learning more each day what it means to trust in God and not in myself.

I'd love to chat with you!

"But seek first the kingdom of God and His righteousness, and all these things shall be added to you. Therefore do not worry about tomorrow, for tomorrow will worry about its own things. Sufficient for the day is its own trouble."
Matthew 6:33-34

God is the Creator